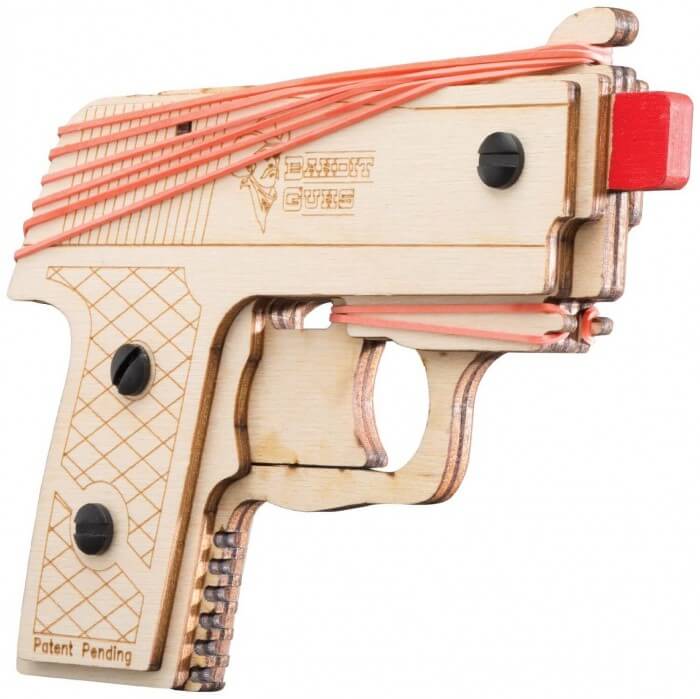 Your rubber band combat as a kid had nothing on this baby. Now that you are fully grown as a modern man who works the ol’ 9-5, you deserve some fun time. We’re talking about a little ode to your childhood. It’s a nifty toy from Bandit Guns Rubber Band Shotgun. Let me introduce you and your man cave to “Pistol Pete.”

Now this is sophistication, yo. The semi-automatic, USA-made shotgun is the focus of this here craft kit. Your ammo is the rubber bands, and you can fit up to six of them on your shooter. It’s an awesome moment when you pull the trigger as fast as you can in a mock-semi-automatic style to release six rubber bands faster than you can blink. And they shoot up to 25 feet long. Awesome.

See the Bandit Guns Rubber Band Shotgun in action for yourself in this video:

That’s some powerful rubber! (Yes, about 101 sex jokes are running through our heads too. Calm down buddy). Shoot the gun at Pistol Pete himself, the collectible character on the back of the craft kit.

And the mock gun isn’t made of shabby materials either. It’s a strong fella, comprised of laser-cut wood pieces. He’s worthy of placement in your man cave amongst your other toys.

Don’t worry if you’re not a handyman of any sorts as you’ll find this rubber band shotgun is a cinch to assemble from the kit. Just stack the series of wood pieces together, hold them in place with a few included plastic fasteners and you’re good for launch time. No tools or messy glue necessary. Yup, in a matter of minutes you can build your own rubber band gun.

The impressive gun comes with a pack of 100 rubber bands, so you’re all set for stationary combat for a while, even if you lose one or two each time you use it.

By the way, a note for the kiddies in your life. The rascals under eight shouldn’t use this toy as they’re under the recommended age. As for the older ones and you, have a blast firing this clever mock gun, one powerful shot at a time!