A Step-by-Step Guide to Leveling Your Foosball Table

The Main Steps For Finishing A Basement

Now: Turn an Old Fridge into an Ice Chest in 7 Easy Steps

DIY 101: How to Build an Amazing Man Cave Bar

How To Make This Wildly Clever Gaping Hole Costume For Halloween 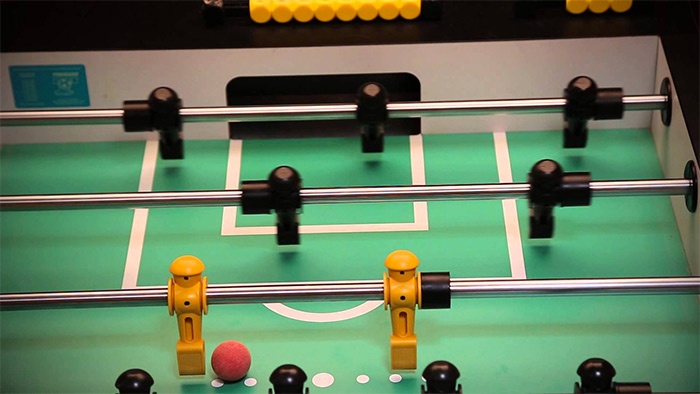 The pull shot is performed by pulling the rod toward your body and then kicking the ball into the goal in a single swift motion. What’s really crucial when learning to master this shot is to first get acquainted with the basics before increasing your shot speed.

To successfully perform the pull shot, you need to have the set up right. This entails pushing the offensive 3 bar against the wall of the foosball table. This way, you would be able to increase the amount of maneuvering your opponent needs to undertake to guard the goal.

A good place to start is to set up the ball on the inside of the middle man after which you pull the rod toward you. As you pull the rod, spin the man’s toes towards the back of the ball. Ensure that you increase your speed at this point to be able to go behind the ball and shoot it straight into the goal.

Most beginners shoot spray shots due to their inability to accurately shoot into the goal. It is best to avoid shooting too many spray shots because such a habit will derail your pull shots in the long run.

Steps to Setting Up the pull shot

Setting up your pull shots the correct way has strong implications for your goal scoring capability. This means that with the wrong set up, you will end up reducing your goal score percentage.To set up the pull shot, you want to place the ball closer to the inside of the center man while pushing the rod all the way into the table.

This set up will offer you greater control over the shot while requiring your opponent to defend a large amount of goal space.It is important for your middle man to always begin at a vertical position. You also want to ensure that the ball is below the bar. As mentioned earlier, spray shooting is often a result of improper set up.

A common reason why spraying occurs is the habit of positioning the center man at an angle in an effort to increase the shot speed. In reality, placing your man at an angle actually slows down your lateral movement and therefore inhibits your pull shot.

ready for the right Foosball table?

Find your perfect table in our reviews!

Wrist technique is essential to improving your pull shots and your foosball game in general. Flexibility is key. A common mistake among beginners is holding the handles of the foosball table too tightly; this tends to slow your speed and increases resistance. On the contrary, a loose, flexible grip gives you wider space for movement for swifter shots.

So, the right way to hold the handle is to allow for some space between the handle and your palm. Something else to consider is your wrist technique—ideally, you should keep your wrist flexible enough to be able to twist swiftly, allowing your rod to spin at 180 degrees. Wrist speed has a direct impact on your shot speed—the faster you can twist your wrist, the greater the speed of your shots.

Scoring Goals with a Pull Shot

Foosball tables typically come with goals that are about 5.8 widths wider than the ball. What this means is that you can score on any of the 5 available holes using your pull shot. At the same time, your opponent has two men defending the goal, leaving you with 3 open holes in which to place your pull shot.

To successfully place shots in any one of the three holes, you need to keenly understand your opponent’s defense tactics. Most players play using a certain pattern, for example by moving their foosball men using the same style. Paying attention to these cues allows you to know when to perform your shots.

It certainly pays off to play against many different players to familiarize yourself with the different defense styles. Exposure to different defenses will help you perfect your performance of the pull shot and increase your goal score percentage.