Do You Have The Balls To Shut Down The Fire? | Man Cave Master
CLOSE

Man Cave Master on Facebook
Home Cool Finds Do You Have The Balls To Shut Down The Fire? 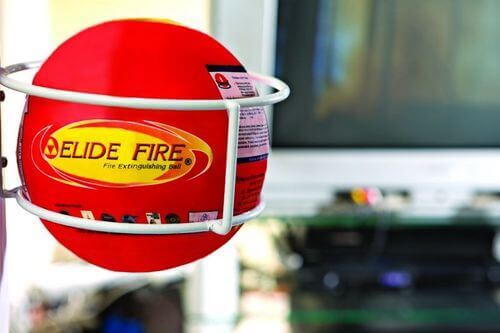 Do you have the guts to put out a fire? Or, in other words, do you have the balls? You will, literally, when you use the Elide Fire Ball to shut down a fire in no time at all. This ingenious wizard ball is the modern take of an old-school fire extinguisher.

You aren’t the only one that can’t remember how to use a fire extinguisher properly and worries about fumbling with it if a fire were to happen in your man cave. Then what would happen to your gaming gear? Ack! The horror!

That’s why Elide Fire created this awesome ball that you simply mount within your lair and the rest of your home in places at higher risk of causing or spreading fires. Mount the fire ball near kitchen appliances, such as your fridge, as well as fireplaces, circuit breakers, and those crowded electrical outlets you haven’t organized yet. In the case of fire, the Elide Fire Ball releases a haze of extinguishing chemicals – automatically!

This means that you don’t even need to be home for the ball to shut down a fire. Sensors in the ball recognize the presence of a fire and gives off a loud alarm before activating and releasing chemicals automatically within only three seconds. Wowsers!

Here’s a video demonstration of how the Elide Fire Ball works:

Is your mind blown after watching that? Yup, us too.

If you are surrounded by fire, which we sincerely hope never happens to you, another option is to grab this magical product and hurl it at the flames to suffocate it with the chemicals that release from it. The ball extinguishes four classes of fires: A (combustible materials), B (flammable liquids), C (flammable gas), and E (electrical fire). Rather than needing different types of fire extinguishers for different types of fires, Elide Fire Ball covers all of the blazing bases.

In addition to putting the inventive ball in your man cave and the other rooms in the house, why not also mount it at work and near electrical parts? You can never be too safe, just like they used to tell us in Sex Ed class. We just didn’t know back then that it had much to do with our balls.