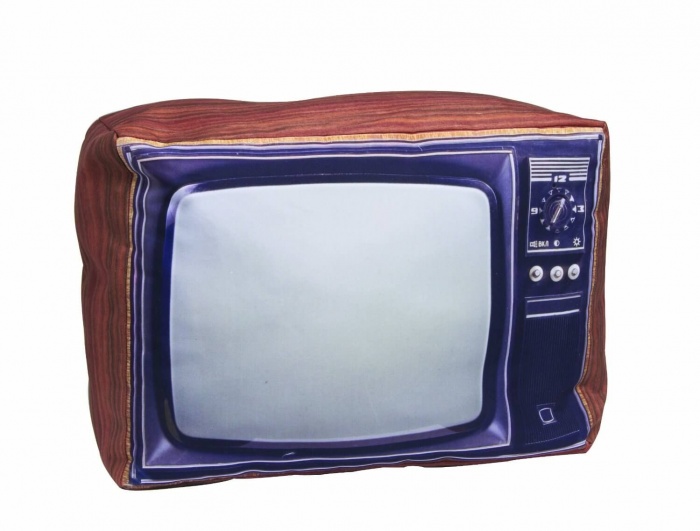 You know there’s nothing better than kicking your feet up on the couch in the man cave and watching Game of Thrones or another epic 2016 TV show. Well, almost nothing. It’s tough to improve this experience, but we’re pretty confident we can do it.

So, what is this secret must-have element? It’s the DCI Television Retro Pillow. This pillow has an amazing likeness to an old-school TV set in a wooden case, just like you would have seen in living rooms across American in the ’70s and ’80s.

This isn’t a shoddy design either.  The rectangular pillow has a full-on 3D design; its front side bears the detailed front of the old-school TV set, the pillow’s sides look like the wooden case, and the back features the backside of the television.

The attention to detail is impressive and quite accurate, down to the knobs and push buttons to the right side of the screen. For the youngsters in the crowd, those knobs and buttons were how people used to turn the television on and off, change channels, and adjust volume. Remember a time before the remote control? If you do, then we think this pillow is probably as nostalgic for you as it is for us.

While the 2016 TV trends include time travel, with shows like Flash, there’s also going to be a reboot of MacGyver, the legendary ’80s series, coming our way. In other words, the past and future are the focus of the 2016 television lineup.

Sure, you’ll get a blast from the past by watching your favorite TV shows on cable or via one of the top 5 media streamers, but you can up the awesome factor by tossing the Television Retro Pillow onto your couch in the lair. It’s soft yet durable, made of 100 percent polyester, and measures 16in long x 11.25in tall x 6in deep.

Now all you need in addition to the retro pillow is a combination of sweet and salty snacks, like ice cream and chips. If you invite us over, we might make you a bacon milkshake too, but only if you fess up to still having a VHS collection.